Thursday Feb 28, 2019 00:00 Asia/Jerusalem
Last date for bids:
Romano Auctions – Mail Auction No. 38:
This auction features Worldwide Postal History Especially Holyland Foreruners Postcards And Covers, Large Collection Of Gold Coins From All Over The World. And Huge Amount Of Banknotes. Other Interesting Items Included As Well.
You can bid via StampCircuit.com, or bid online Interactively at Romano's new Website www.romanoauctions.com 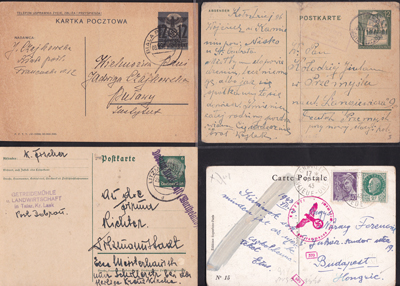 1936- 1944. A group of 37 envelopes and postcards in part, by registered mail, sent from special camps in labor camps and detention camps in Slovakia. Germany. From Strobeitz to Cottbus, Leipzig and N26, and from Transylvania, Budweis, Baranovich and France.

1939, Olkusz, a town in the Karakow Province, Poland. This certified document allowed the BEARER one of the six in total bags of sugar issued to the Jewish community. Dated 12th October 1939. 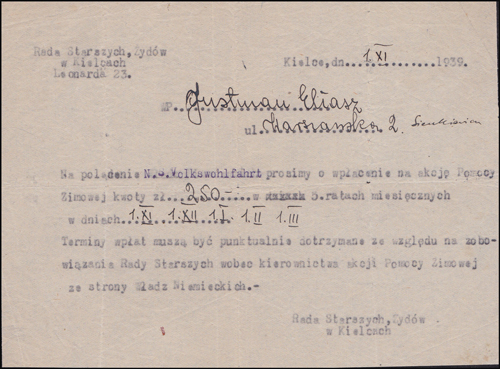 1939, This original document sent to Eliash(z) Justman by the Kielce ghetto Judenrat, 1st November 1939, "By the order of the N.S. Volkswohlfahrt, you are to pay 250 Zlotys for the winter help campaign in five monthly installments of 50 Zlotys; on the I XI, I XII, II, I II, I III. 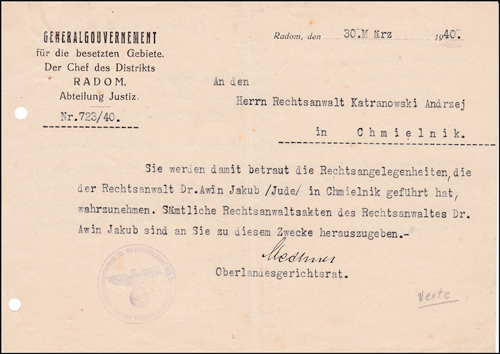 1940, An original German document from the RADOM district legal department ordering a lawyer Andrzejowi Katranowaski, in Chmielnik, to keep a look out for cases driven by a lawyer Dr. Awin Jakub, a Jew living and working in Chielnik. Dated 30th March. 1940. ON THE REVERSE THERE IS A RESPONSE; one can make out from it that Dr. Awin closed down his apartment and ran away from the nazi's to LWOW. As none of his cases were ever found, no one... 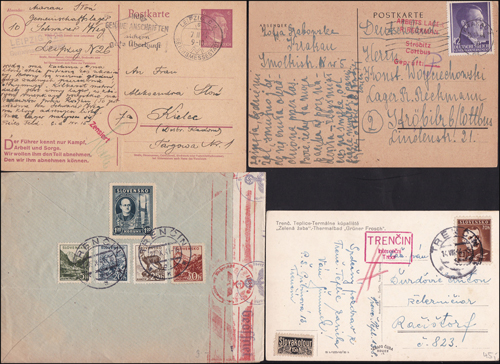 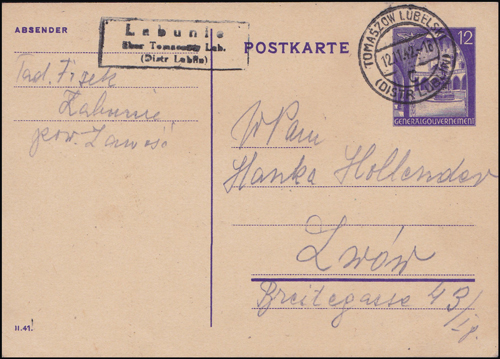 1942, A Pre-Printed Postcard to Lwow in Lemberg, from Tomaszow Lubelski, A town in Lubunie province. Eastern Poland-under which Lubunie ghetto fell. 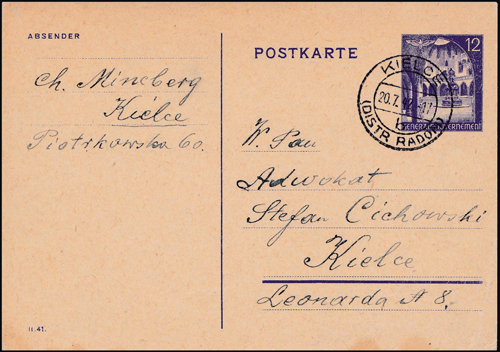 1942, Ch.(Chaim) Mincberg of the Kielce Jewish ghetto. Sending this pre-stamped postcard to a lawyer also in Kiece, but outside of the ghetto, in the District Radum. Cancelled 20 July 1942. 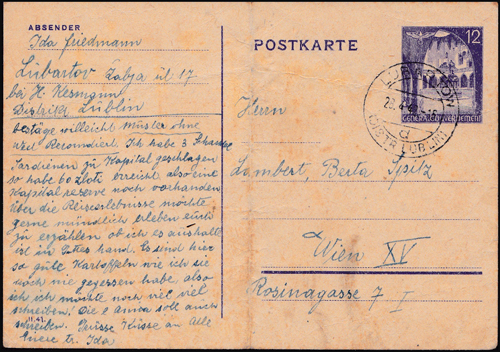 1942, Lubartow, in the district of Lublin, E.Poland, A Postcard written from Ide Fridman to Berta Spitz c/o Lambert in Vienna, Dated 28th April, 1942. (During mid April was when two Trains filled with Slovakian Jews, mainly woman &Children, had been deported to Lubartow, which was one of the destination where Jews from all over Poland were assembled to be sent to the Death Camps) 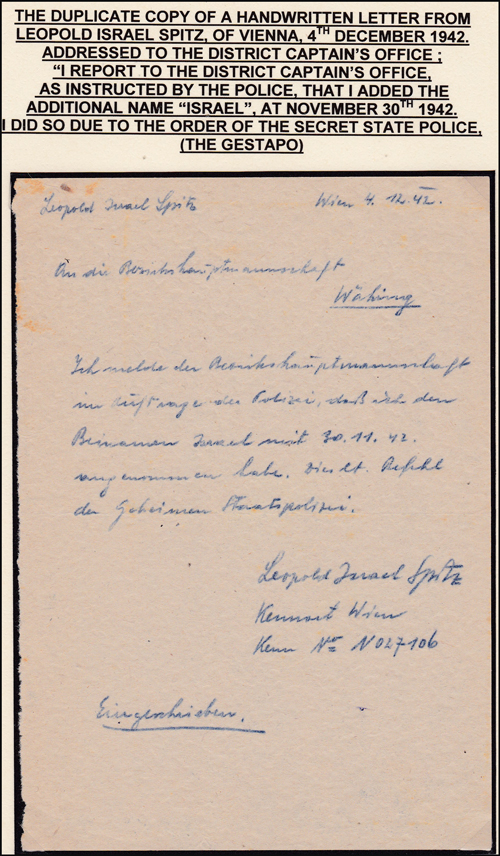 1942, The duplicate copy of a handwritten letter from Leopold Israel Spitz, of Vinna, 4th December 1942. Addressed to the district captain's office: "I report to the district captain's office, as instructed by the police, that i added the additional name "ISRAEL". At November 30th 1942, i did so due to the order of the secret state police, (the gestapo). 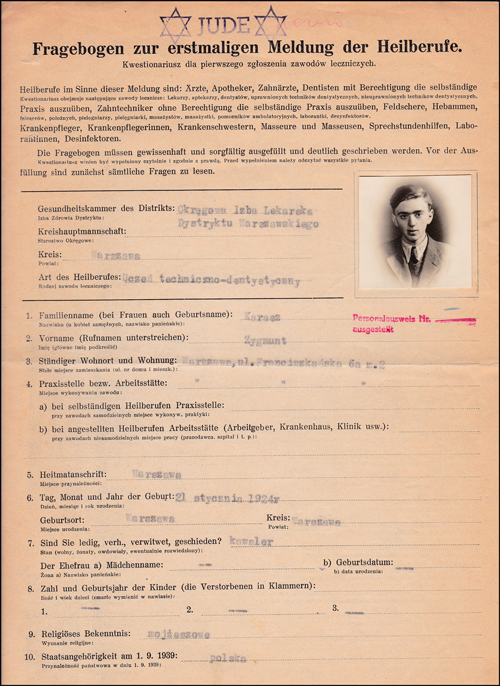 1942, Very rare four sided jewish document (questionaire) given by the Germans in 1942 to residents of formerly Soviet-occupied Poland intended to identify Jewish professionals apparently with a view to their impending deportation to camps. The document to be completed for the German authorities by health professionals reporting for the first time (Fragebogen zur erstmaligen Meldung der Heilberufe) was filled out by Karasz Zygmunt, a dental... 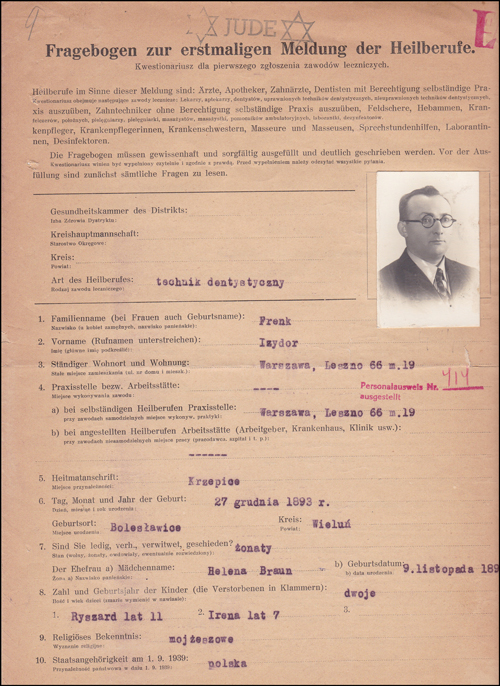 1942, Very rare four sided jewish document (questionaire) given by the Germans in 1942 to residents of formerly Soviet-occupied Poland intended to identify Jewish professionals apparently with a view to their impending deportation to camps. The document to be completed for the German authorities by health professionals reporting for the first time (Fragebogen zur erstmaligen Meldung der Heilberufe) was filled out by Frenk Izydor, a dental... 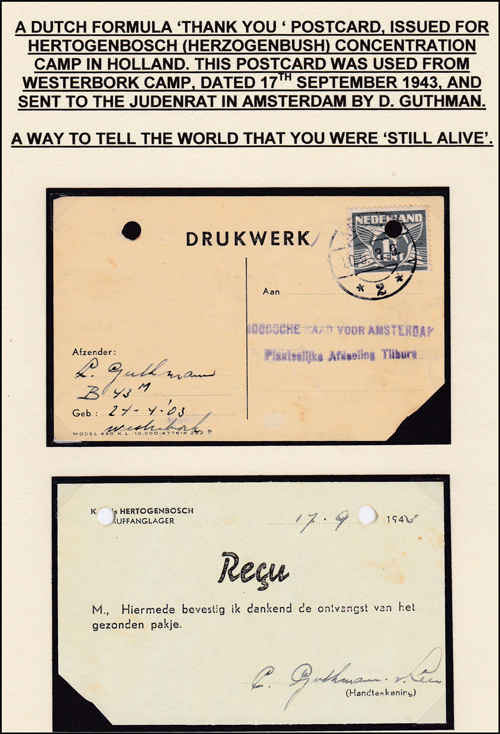 1943, A Dutch formula 'thank you' postcard, issued for Hertogenbosch (Herzogebbush) concentration camp in Holland,this postcard waqs used from Westerburk camp, dated 17th September 1943, and sent to the Judenrat in Amsterdam by D. Guthman. Away to tell the world that you were 'still alive'. 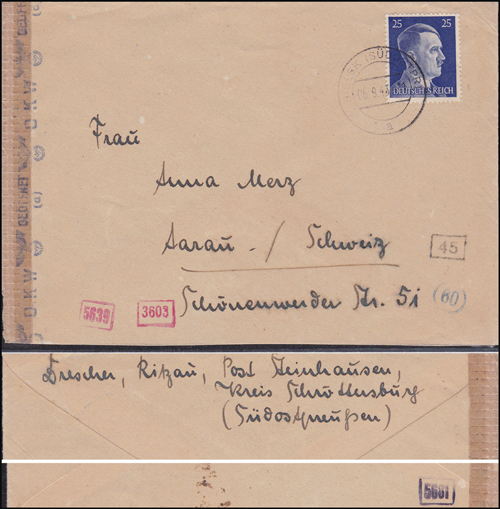 1943, Cover sent from Bielsk ghetto in Poland, to Mrs. Aarau Schweis on the 6th September 1943. Opened by Nazi censor and Resealed-Okw. 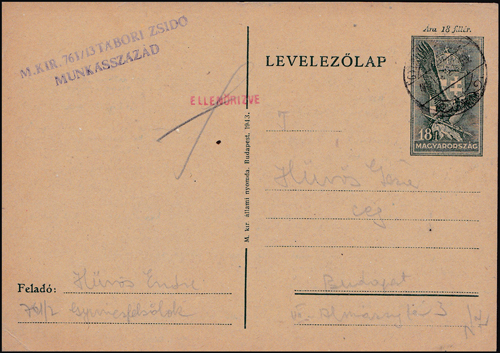 1943, This Hungarian pre stamped postcard, dated 1943, sent by a Jewish prisoner in a forced labor camp in Hungary, and addressed to Budapest, its capital. Hand stamped by the camp authorities in violet;"M. KIR. 761/13 TABORI ZSIDO MUNKASSZAZAD".(Royal Hungarian camp No. 761/13 for the Jewish working battalion-or forced labor camp') also hand stamped in red, then crossed out;"ELLENORIZVE"-(Censored or checked). 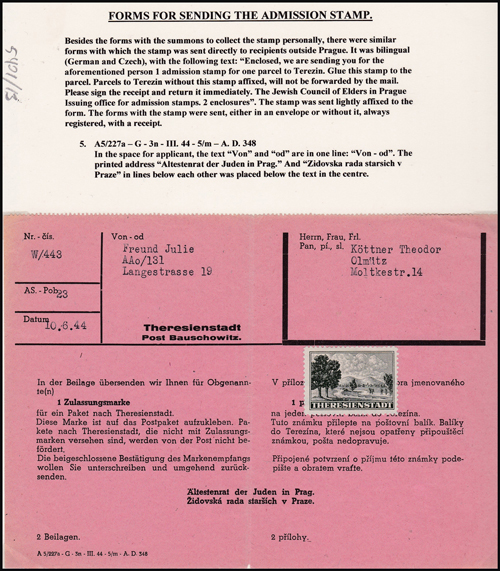 1944, FORMS FOR SENDING THE ADMISSION STAMP. THERESIENSTADT. 3rd Reich Concentration Lager KL KZ Theresienstadt Receipt for Z1
Besides the forms with the summons to collect the stamp peronally, there were similar forms with which the stamp was sent directly to recipients outside Prague. It was bilingual (German and Czech), with the following text: "Enclosed, we are sending you for the aforementioned person 1 admission stamp for one... 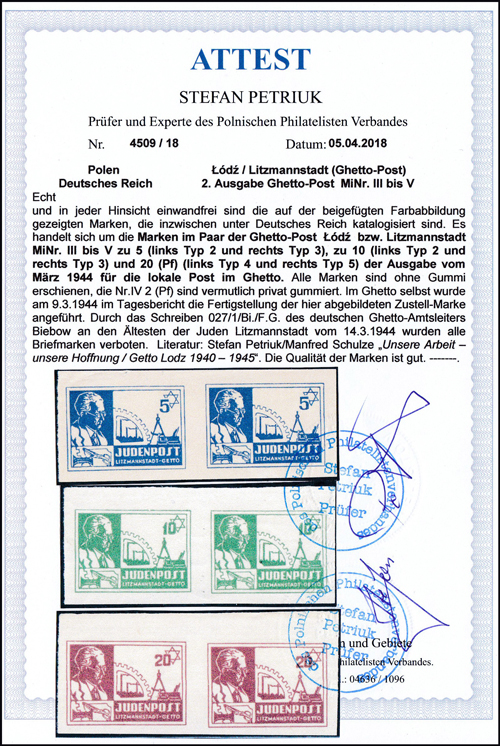 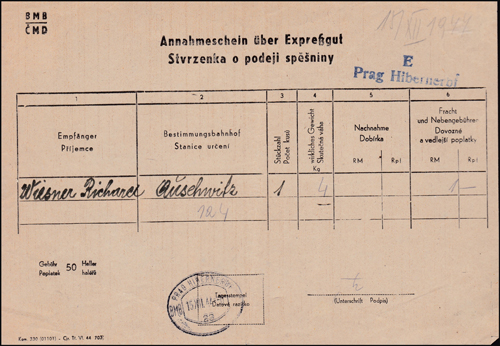 1944, Postal receipt for a Registered Parcel-to Richard Weisner-Auschwitz Concentration Camp. Issued in Prague on the 15th December 1944. The parcel weighed 4Kg., and the charge was 1RM. (Was Richard WeisneWESTERBORKr still alive in December 44 ? -if so, what chance would he as a Jew ever have to receive this parcel ?). 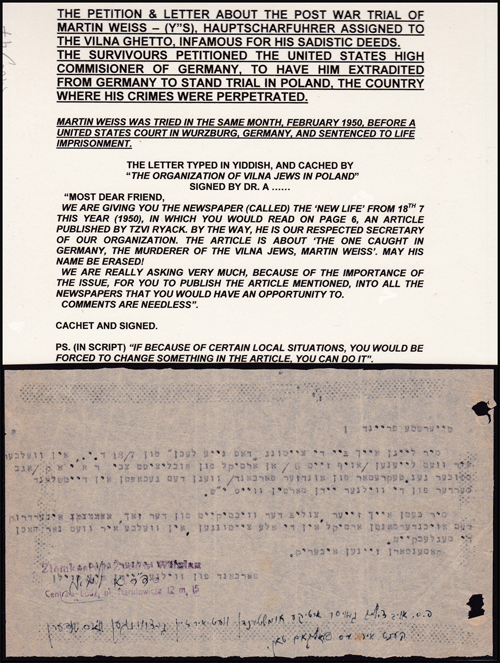 1950, THE PETITION & LETTER ABOUT THE POST WAR TRIAL OF MARTIN WEISS - [Y"S]. HAAUPTSCHARFUHRER ASSIGNED TO THE VILNA GHETTO, INFAMOUS FOR HIS SADISTIC DEEDS. THE SURVIVOURS PETITIONED THE UNITED STATES HIGH COMMISIONER OF GERMANY, TO HAVE HIM EXTRADITED FROM GERMANY TOP STAND TRIAL IN POLAND, THE COUNTRY WHERE HIS CRIMES WERE PERPETRATED.
Martin Weiss was tried in the same month, february 1950, before a  United States court in... 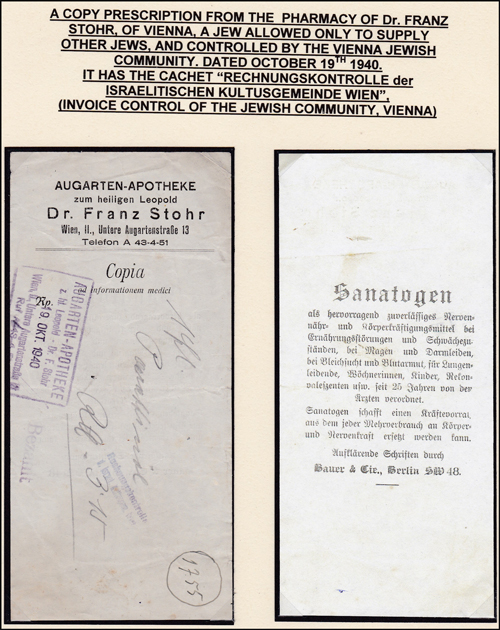 A Copy prescription from the pharmacy of Dr. Franz Stohr, of Vienna, a Jew allowed only to supply other Jews, and controlled by the Vienna Jewish community. Dted october 19th 1940. It has the cachet "rechnungskontrolle der Israelitischen Kultusgemeinde Wien", (Invoice control of the Jewish community, Vienna). 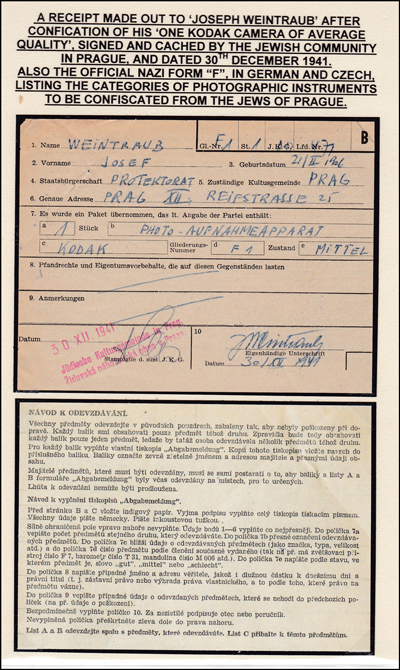 A receipt made out to 'JOSEPH WEINTRAUB' after confication of his 'one kodak camera of average quality'. Signed and cached by the Jewish community in Prague, and dated 30th December 1941. Also the official nazi from "F", in German and czech, listing the categories of photographoic instruments to be confiscated from the Jews of Prague. 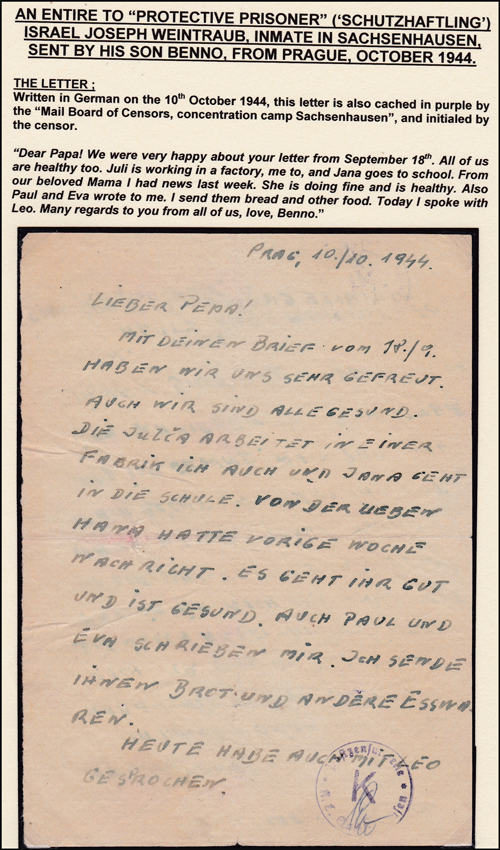 AN ENTIRE TO " PROTECTIVE PRISONER" ('SCHUTZHAFTLING') ISRSEL JOSEPH WEINTRAUB, INMATE IN SACHSENHAUSEN, SENT BY HIS SON BENNO, FROM PRAGUE, OCTOBER 1944. THE LETTER; Written in German on the 10th October 1944, this letter is also cached in purple by the "Mail Board of Censors, concentration camp Sachsenhausen". and initialed by the censor. " Dear Papal We were very happy about your letter from September 18th. All of us are healthy too. Juli... 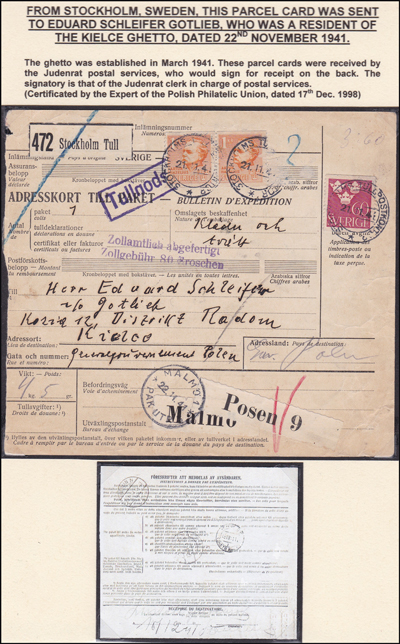 Lot of 18 diff postcard and parcel card and postal receipt all diff.
1941, Pacel  card from Stockholm, Sweden, this parcel card was sent to Eduard Schleifer Gotlieb, who was a resident of the Kielce Ghetto, dated 22nd Novenber 1941.
1941, Parcel reciept sent to the Ghetto.
German postcard sent from Litzmannstadt ghetto to an address in Russia.
1942, 'ZURUCK' [RETURN TO SENDER]. Apre-stamped postcard sent by Max... 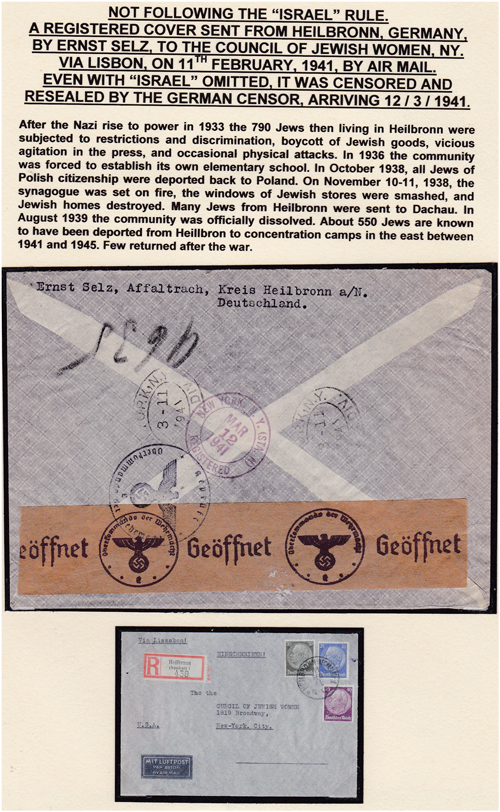 NOT FOLLOWING THE "ISRAEL" RULE. A registered cover sent from Heilbronn, Germany, by ernst selz, to the council of jewish women, NY. VIA LISBON, on 11th February, 1941, by AIR MAIL. even with "ISRAEL" omitted, it was censored and resealed by the German censor, arriving 12/3/1941.