Rarities from all areas of philately are on offer, including the ‘Greifensee cover’, probably the most important cover of classic Swiss philately.

From 25 to 30 January 2021 Corinphila Auctions will offer for sale a very unusual range of material. The high-quality material being offered will be presented in no less than eight luxury auction catalogues.

The auction begins with high-quality offers from South American countries. The Brian Moorhouse Estate (Part 3) is notable for its wide variety of South American collecting areas from A (as in Argentina) to V (as in Venezuela). Especially impressive are the many proofs of various issues from classic to middle-period. Particularly well represented are Argentina, Brazil (including Lot 3137, the famous pair of the 600 Reis “Goat’s Eye” issue of 1844, in an unused pair from the Maurice Burrus collection, starting price CHF 5,000), Colombia, Costa Rica, Guatemala classics with the rarest covers and proofs, Honduras, Mexico and Uruguay.

The first part of the most important specialised collection of the first issue of Ecuador of 1865 in existence will be offered for sale under the name ‘Guayaquil’. Almost all the important items of this collecting area are in the collection. Particularly outstanding is the more attractive of only two known registered covers with the first issue (Lot 4071; starting price CHF 20,000).

A fine range of the classic issues of Peru will come up for sale in the main catalogue of the Corinphila auction series. Among these are also many stamps from the issues produced in continuous rolls on the ‘Lecoq’ printing press. Particularly appealing is an unused strip of five of the 5 centavos of 1870 showing the ‘new’ railway from Lima to Callao. The ‘Trencito’ , ‘the little train, as collectors later called the stamp, was intended for letters carried on this new railway line. To make endless rolls of the stamp, the ends of the lengths of paper were simply glued together! This is clearly visible here on the fourth stamp in the strip (Lot 156, starting price CHF 750).

Europe is represented with a wide range of material from the Pietro Provera collection. The emphasis is on Italy and France. The outstandingly good quality of the classic stamps and covers, for which this collector was well-known, is particularly impressive. For many years, "Provera quality" was a term used for top-quality philatelic material in many countries. For example, there is a cover with France’s first issue of 1849, a very rare tête-bêche pair of the 20 centimes on cover (Lot 5141, starting price CHF 5,000). Or a four-colour franking of Sicily with the extremely rare top value of 50 grana on cover (Lot 5675, starting price CHF 20,000).

Another very unusual specialised collection comes up for auction with the Gregory Frantz "Stamp Issuing Steamship Companies" collection. It includes all the private steamship lines that issued privately produced stamps for mail carried on their ships. The many small shipping lines on the thousands of lakes and the coast of Finland offer great variety, often in combination with state stamps. An example is the ‘Skärgards Trafik Aktiebolag’ (STAB) cover with the private bicoloured 25 penni ship’s stamp for delivery within Finland by the private shipping line, in combination with the Finnish state-issue 5 penni and 20 penni for onward transmission to Frankfurt (Lot 6069, starting price CHF 1,000).

Switzerland is also represented again with an outstanding range of material. This includes a postal history collection "Franco-Prussian War - Impact on Swiss Postal History 1866-1871". The presentation in the auction catalogue combined with historical background information is unique and is likely to set new standards for philatelic auctions. One could almost speak of a milestone of philately, on its way to being recognised as an additional historical science. A ‘must’ for every philatelist interested in history!

However, the second part of the ERIVAN collection is undoubtedly outstanding in its Swiss material. The collection of the former Tengelmann entrepreneur Erivan Haub contains the greatest rarities of Swiss philately. Now the famous registered cover from the "Notariat Greifensee" comes up for sale. Franked with Switzerland’s first two stamps, the Zurich 4 and Zurich 6, it is for many the "non plus ultra" of Swiss rarities in private hands. The provenance of the item goes back to 1900 when, in the collection of the then President of the Banque de France, Paul Mirabaud, the cover caused a sensation at the Paris Exposition. It later found its way into the collections of Diem-Saxer of St. Gallen (1934), the Swiss shoe magnate Iwan Bally (1964), and then the ‘HELVETICUS’ collection (1991) before finding a new home in the collection of Erivan Haub for almost 30 years. The starting price of the Greifensee cover being offered as Lot 7003 is CHF 300,000.

All the material being offered can be viewed at www.corinphila.ch.

Peru 1870, 5 centavos ‘Trencito’ in a strip of five with the fourth stamp showing the paper join.

Finland 1880, private ship’s stamp in combination with stamps of the state Post Office on cover to Frankfurt.

Zurich 1843, registered cover from the Greifensee notary’s office with the first two stamps of Switzerland. 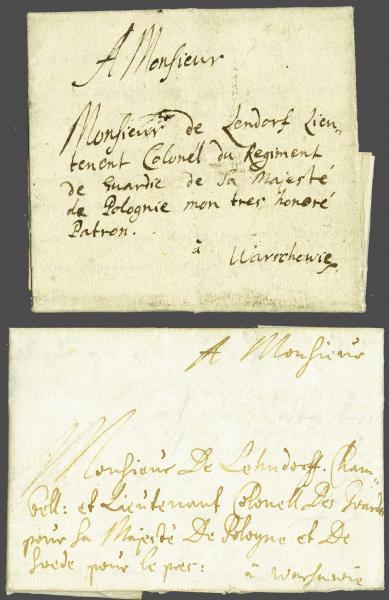 Russo - Polish War 1666: Two entire lettersheets from East Prussia to Gerhard Ahasverus Count of Lehndorff (1637-1688), Officer in the King's Guard in Warsaw, one dated Oct. 8 from Ludwigsdorf (probably Lodwigowo) the other dated Dec. 29 and sent from Hohenstein (probably Olsztynek), both with fine wax seals on reverse and with full text transcriptions attached. A fine scarce pair.
Catalogue 257: EUROPE & OVERSEAS 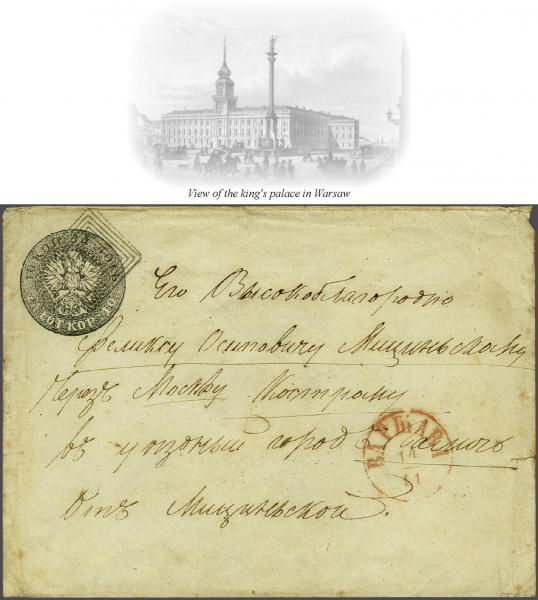 1860: Stationery envelope with the 10 kop. indicium at top left, cancelled in squares with "WARSAWA 14 / 11" cds in red alongside, sent to Moscow. The cover shows on reverse in Russian and French the handwritten text "Read in the secret office of the General mster of Police in the Realm of Poland, Warsaw 11/23 November 1864 (closed with wax seal of the Police Chief)". Cover with some tear and wear but a most interesting censorship item.rnNote... 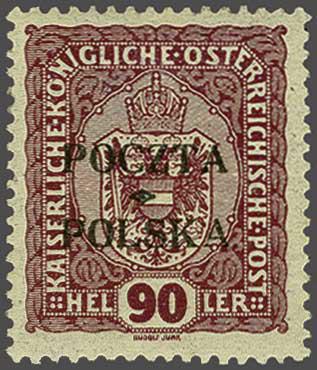 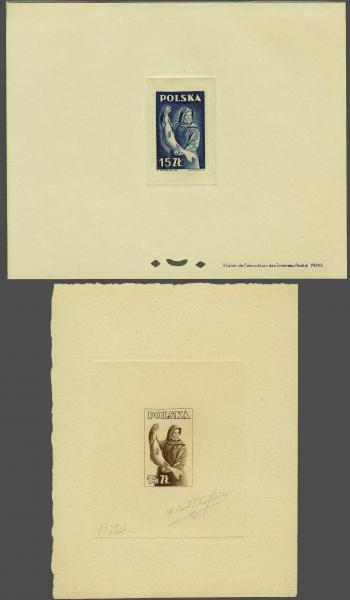 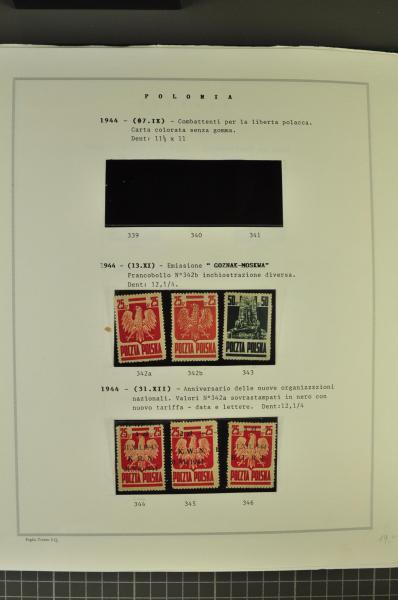 1915/1990: Collection in mint and used condition in Albums and on pages from the beginning of modern Poland. It starts with single essays for the first issue in unadopted designs and a good run of local issues after the first war. There is a selection of Stadtpost locals from Warzawa, Predborz and Zarki. A cover from Lublin franked 50 H. green Mi. 27 with additional franking is prominent in the Austian overprint section. After World War II,... 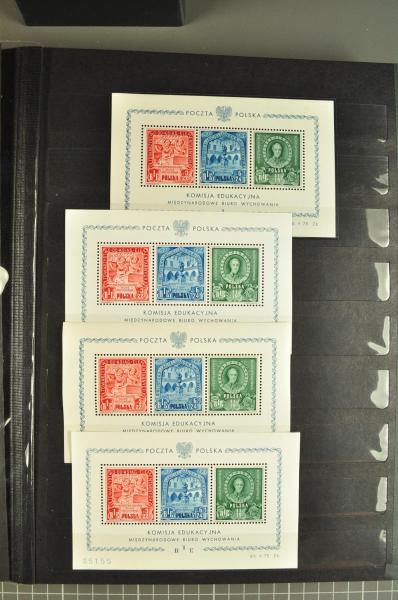 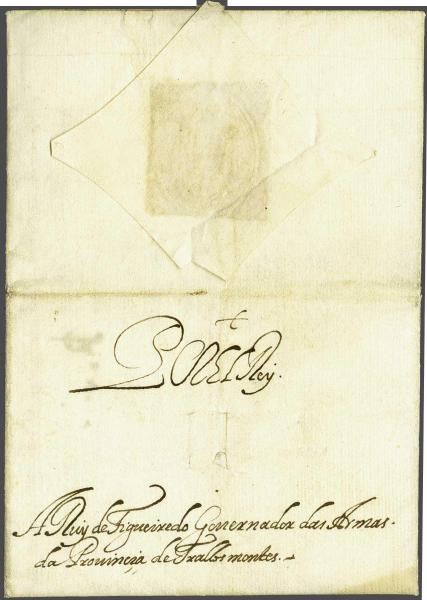 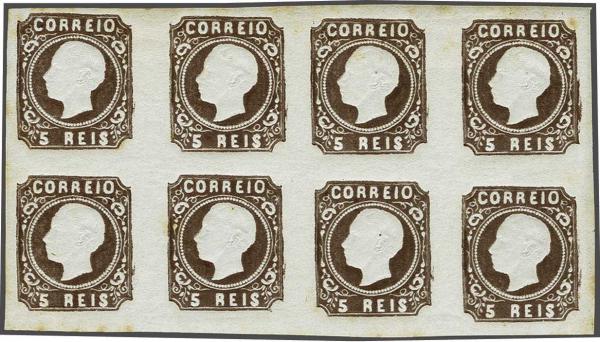 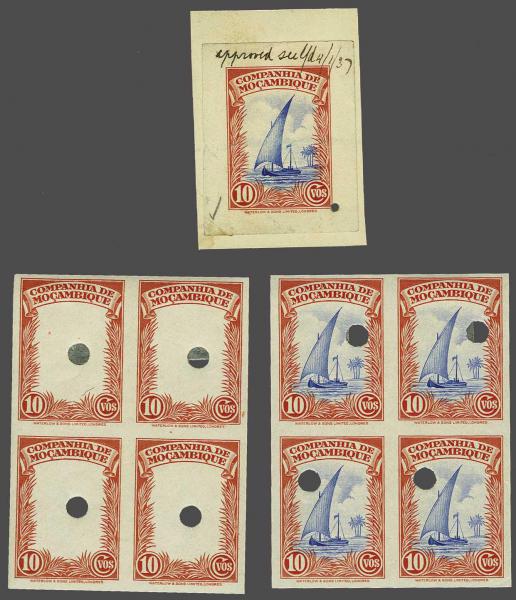 Mozambique Company 1937: Waterlow Proofs (3) for the 10 c. red & ultramarine value with original Proof in issued colour with small security punch-hole and applied to card (34 x 48) with "Approved l/d (letter dated) 4/1/37", and imperforate Plate Proofs with large security punch-holes for Frame Only in a block of four and the completed design in a block four, these last with large part or unmounted og. A very scarce trio, illustrated in... 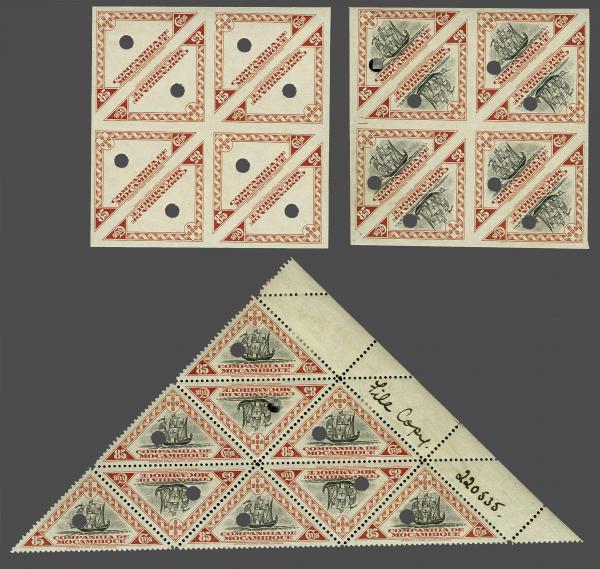 Mozambique Company 1937: Waterlow Proofs (3) for the 85 c. brown-red & black, with an imperforate "Frame Only" Proof block of eight and the completed design, imperforate Proof in a matching block of eight, together with a marginal block of nine as issued with manuscript "File Copy 220535" in ink in margin, all with security punch-holes, fresh and fine, large part or unmounted og. Scarce. Illustrated in Edition D'Or LXV on page 52.
... 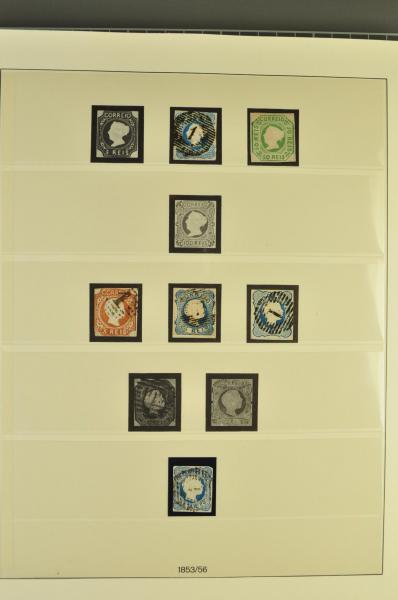 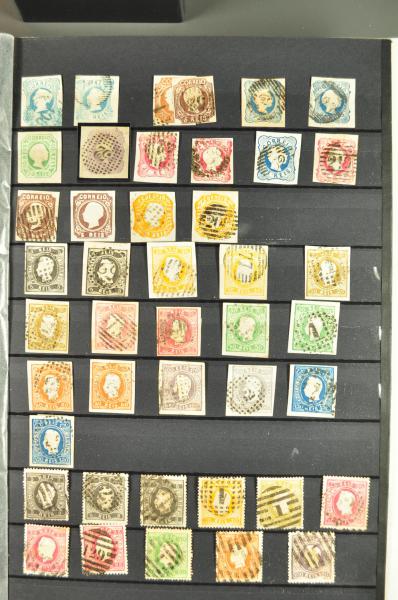 1853/2000: Powerful collection in mint and used beginning with imperf classics containg a multitude of valuable stamps, many of the early issues are signed Diena. A special mention deserve the 1866 Louis imperf issue which is contained twice in very fine used condition. 1893 Provisorio overprints, 1895 San Antonio and much else. The strength of this collection lies in the issues before 1950. A second volume of Portuguese Colonies contains... 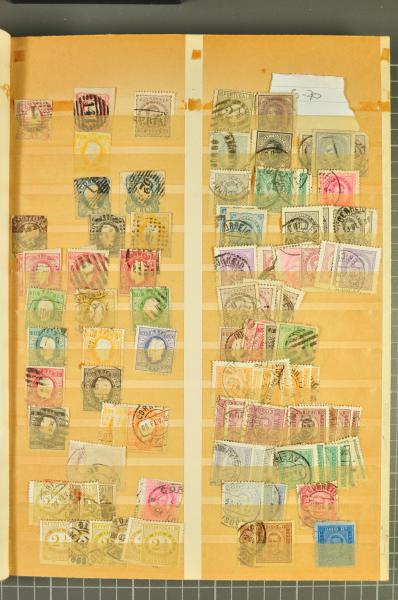 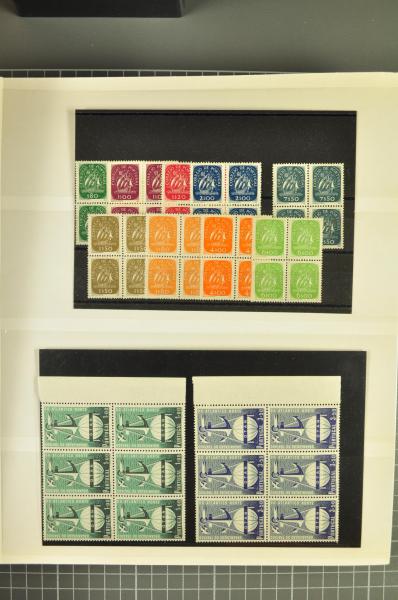 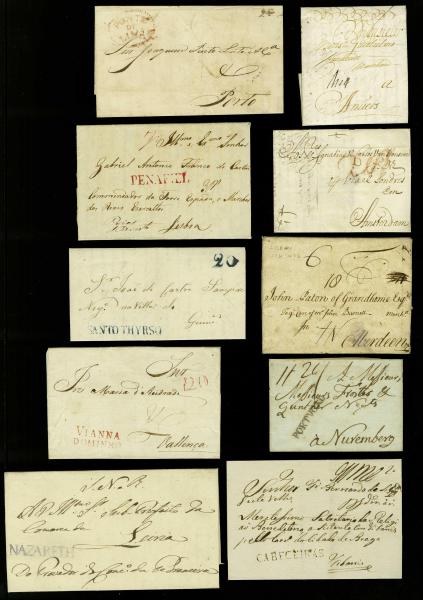 1680/1853: The award winning eight frame exhibit (128 pages / 235 covers) with a superb early study of routes and rates including entire letter 1680 from Lisbon to Livorno, 1694/1734 entires to Aberdeen, Antwerp, Leyden and Amsterdam, 1795 entire with PORTVGAL entry marking to Nuremberg and 1801 strike in red; internal mail from 1801 entire to Braga with “COR° EXTRAORD / LISBOA” in black (ten known), further town markings of Lisboa, Agueda,... 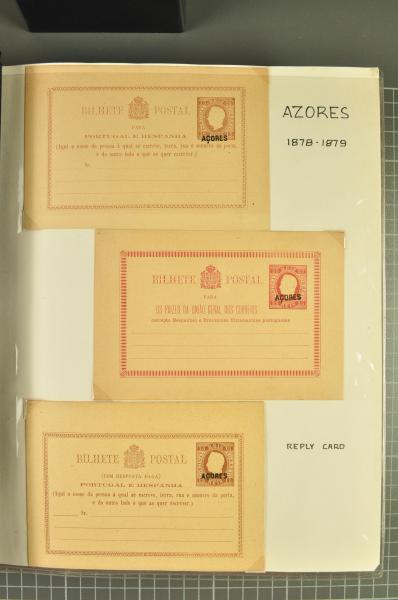 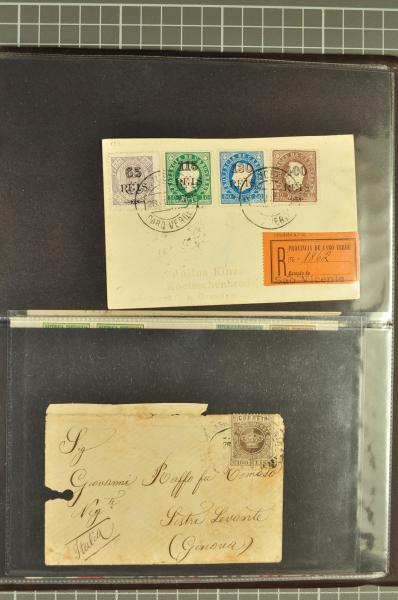 Portugese Colonies in Africa 1881/1970c: Lot 15 covers incl. Cabo Verde 1881 via London to Italy with 100 reis franking, 1905 Sao Vincente via Lisbon to Germany, Mozambique 1913 Beira via Rhodesia and the Cape to London, 1898 stationery postcard Lourenco Marques to Switzerland, 1919 two registered covers from the French consulate with combined definitive and war tax frankings via London to Paris, also 1943 Angoche to Switzerland with British... 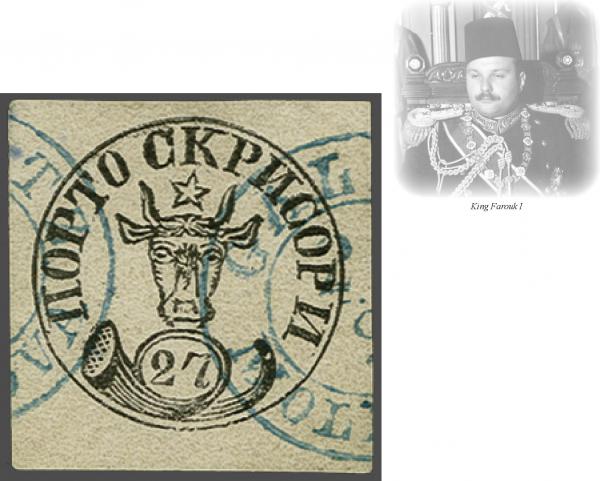 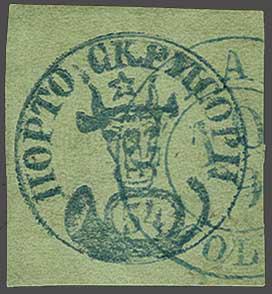 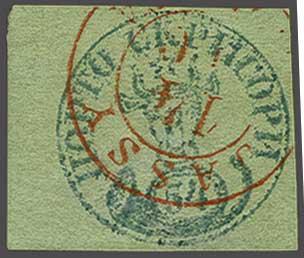 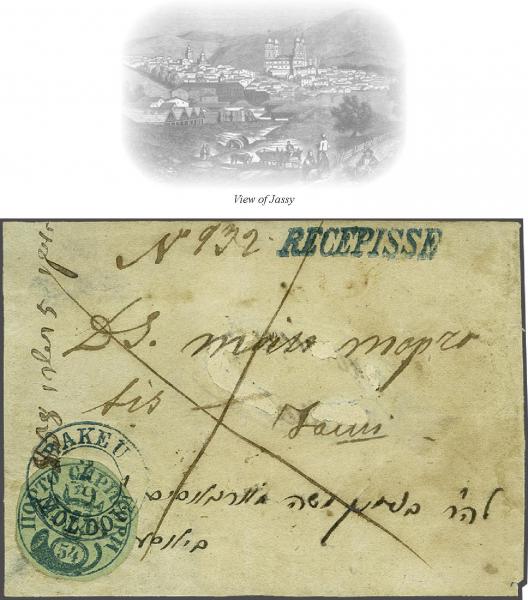 1858 (July 21): Registered Cover front from Bakeu to Jassy bearing Bull's Heads 54 parale green on greenish laid paper, a single example cut round as usual for Bakeu, tied by "BAKEU 2/9 MOLDOVA" cds in greenish blue (Kiriac fig. 271). The large part letter front was partly reinforced and the address somewhat retouched, it shows a straight line RECEPISSE in blue, the part reverse has "JASSY 5/9 MOLDOVA" arrival cds in red. In spite of its... 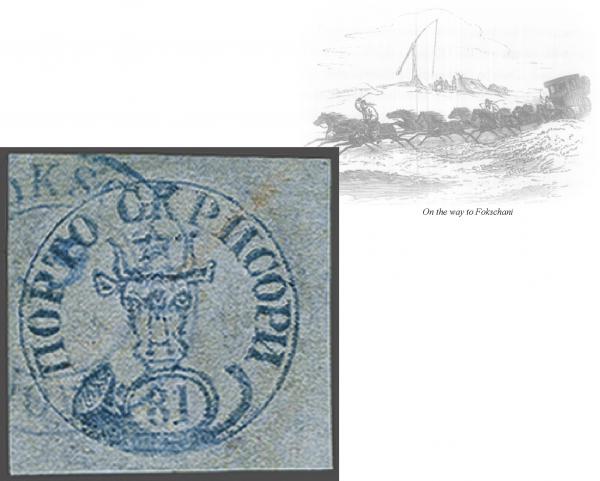 1858 (July 21): Bull's Heads 81 parale deep blue on blue wove paper, a used example of nice appearance but repaired and rebacked, cancelled by "FOKSCHANI 9/." cds in blue (Kiriac fig. 275) and trace of red crayon characteristic for Fokschani. Very rare and so far only 26 used examples of this classic rarity recorded, seven of them from Fokschani. Cert. Heimbüchler (2001) Mi = € 48'000.rnReference: Described and illustrated in Heimbüchler -... 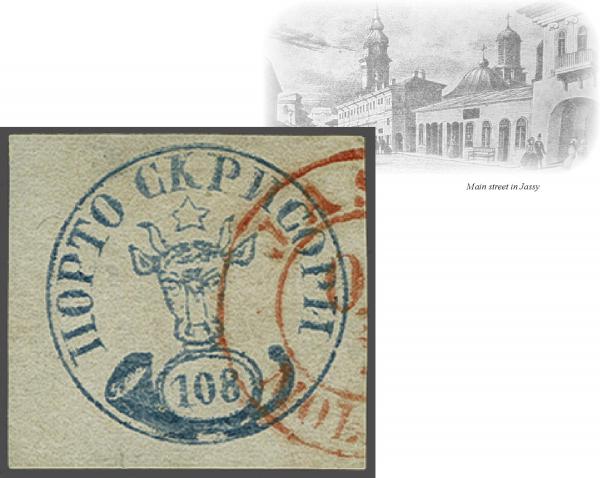 1858 (July 21): Bull's Heads 108 parale blue on rose horizontally laid paper, a magnificent large margined used example of delightful aspect, cancelled by JASSY ./.0 MOLDOVA cds in red with inverted date slug (Kiriac fig. 279). Minor repaired thin behind the 'T' of 'PORTO' and a small nick in the margin at base do not affect at all the appearance of this appealing stamp showing great clarity of impression. A rarity with just 2574 printed. A... 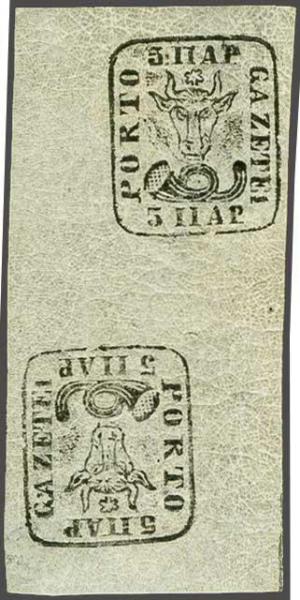